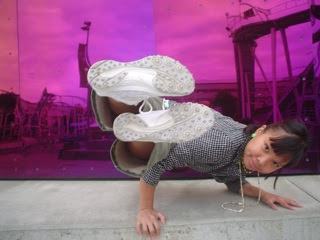 Fides "Anna Banana Freeze" Mabanta is a human work in progress. Born in Luzon, Philippines, her early childhood consisted of curiosity, bossiness and a vivid self-awareness. At age four, her family uprooted to Nea Makri, Greece via the American navy, as well as to and throughout the continental U.S.; eventually migrating to Everett in Washington state.

Eventually Fides became "Anna Banana Freeze" - a core member of the Massive Monkees crew. She also created the small but growing force that is Mini BREAKS - a hip-hop platform where children are nurtured to be themselves, use their voice, and form community.

It's been over 11 years since ABF got into hip-hop. She now focuses her time deciphering and manifesting sustainable entrepreneurship for herself and fellow artists in her community, healing her broken body, and raising her beloved teenager with her partner. This past year has been her biggest level-up, yet. As the founder of Mini Breaks she is full of hope, plots, and dreams happening right now.